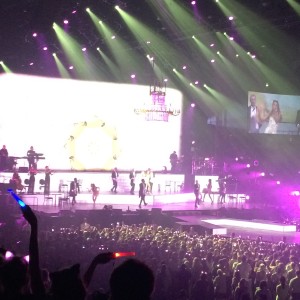 Upon my retrurn from my 4-weeks cruising around Europe the next highlight came up: attending Ariana Grande’s concert in Cologne. Kind of disappointing.

I am certainly no music expert, but the experience I have had visiting this concert is disappointing. Ariana Grande is considered to be as a pop singer being top of the pops these days and I admit, some of her speedier songs I kind of fancy to swing along with.

But it is music out of the box, nothing special, and I wonder, how long her star will shine. Tickets were sold 6 months ago and it is a proven business modell, to collect all funds long time in advance, working with it on the financial market, before dishing it out and paying the bills related with her concert.

It was scheduled to start at 7:00 pm. Entering the hall at 6.00 I looked around and found myself surrounded by lots of youngsters. I wonder what Ariana Grande has done for fans to write boards with „you are the name of my tattooed heart“. Apart from being an alliteration to one of her song lines, what’s the point?

The show started dead on 7:00 pm with a DJ heating up the public for the upcoming main act. It was simple and almost cheap. I have seen much better and in the past these starting acts could also turn out to become more stars on their own. Supporting acts like what I have seen today will be laughed at and just forgotten. What was the name of the guy again?

He finished his performance 20 minutes later, the public turning crazy for no apparent reason and to my understanding they could have put up with a Muppet show. It would have had the same effect.

At one stage a silhouette showed up in the upper range and the public turning absolutely crazy. But was it actually Ariana Grande herself? It could have been anybody. It was also widely known, a few Youtubers had rented a private box and as if the hype around Ariana was not enough, the craze around these chaps was as much. I really have difficulties to understand this behaviour for almost no apparent reason. Though some of the Youtubers produce actually quite funny short-cuts, but the majority is just self-devouring ego-crap.

At 7:30 pm Ariana entered the stage and was just driving down her programme. Nothing special and only her most recent disc. I am impressed though to see her jumping around in high-heels like she does. Amazing!

Another effect of modern times is as soon as the show starts most people grab their phones and actually film the whole event from the first second to last. Do they actually realize where they are and could they watch with their proper? Nothing against a few takes here and there, but the whole concerts? And Wunderkerzen have turned into the lighting functionality of the phone.

I also found technical level of the show was poor. She was obliged to sing through an old fashioned microphone instead of one strapped to her head. And when some live images were shown on the back of the stage the quality was really poor.

Music out of the box, a very limited show programme, overexcited folk happy with whatever little was presented to them and almost no demand in quality, just consumption mode – disappointing.

Ariana Grande wanted to do something special and presented a flimsy glove, which produced electronic sounds and images depending to the movements of the hand. A witty ten-year old could have developed and performed better. But her fans were out of control. Ridiculous!

She just played down her show. One song after another and changing clothes every second song. Eventually she appeared in white kind of wedding dress, sitting on a piano. Appear on stage, play it down, disappear, off to the next with no clear link of why this song after another. Just ticking off song after song.

1:15 later the show was over. Over and out. But as if this purely commercialised show had not been enough, the band just pushed the audience to yell for some additional. Really pushing them, If they hadn’t, everybody would simply have gone. The Stones, the Ramones – who would have dared?

It happened what had to happen and at least not to my surprise Ariane Grande reappeared on stage, a new dress of course, played down another song, and that was it. As soon as she was off stage, the lights went on. The audience was not give the chance to ask for another song. They didn’t anyway.

What a scam! 60 Euros for the entrance plus some 25 Euros additionally for an obligatory merchandising down-payment which was supposed to be available online. This procedure did not work and was widely commented in the internet. But it did not h´ve any effect. The organisers just did not bother. The €25 were simply lost.

The catering in Lanxess Arena is nasty, actually the Fanta smells as if some beer has been mixed with, and the Cola, as cheap as it tasted, can hardly be Coca Cola or Pepsi.

And to top it all, when we go out it was still light. I may not have visited many concerts in my life, but I have never left any concert finding myself in full daylight. Never seen before, not even with concerts taking place in summer time. 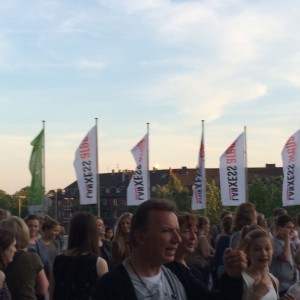 My most disappointing experience though was, the few songs I liked, where she performed together with other artists, were partly playback. So if I had any positive impressions about Ariana Grande and her art-work, latest now this it was taken away. She may still be hip some time to come, but I am sure, she will be out shortly, unless she really puts up with some good quality stuff and not just trying to skim off most possible during her probably short time of fame.

Ah, and by the way, Niki Merage was ion stage, too. Seen as a dancer amongst others, she was not introduced at all. And one of my favorite song is with her together. Another missed chance for me to tattoo Ariana’s name on my heart. I’ll forget very soon. Ariana who?