Denmark on a bicycle 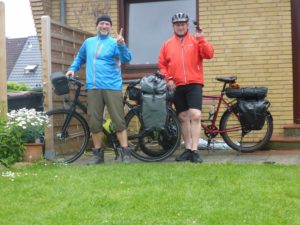 When travelling Denmark on a bicycle, it is good to know and be aware about a few things prior to departure in order to not experience bad surprises. It is definitely worth cycling round Denmark, but be prepared….

… the nationalism: the Danish are pretty proud of their country. Wherever you go you will see the Danebro, the national flag. It is the oldest national flag in the world. It looks nice seeing them flying in the wind wherever you are, but for my gusto, a bit too many. As a German I have some issues showing national pride to such extent. But when discussing with Danes, you see their pride is not only expressed by showing the flag, it is in their heart. So beware when discussing national pride or politics – Danish dynamite is well abound! 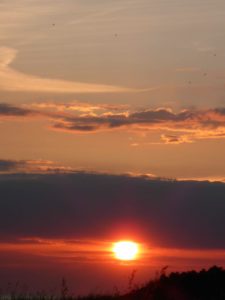 When planning to cycle around I thought cycling is a national thing to do. Go to Copenhagen and you understand what I am talking about. But outside towns you will find hardly any seperate cycling roads. You will be obliged to use the main road which I find quite awkward. So when going in-between cities prepare to go main roads with cars and lorries rushing around you. Sometimes too close and it is as if they are not used to cyclists on the road.

The wind, blime, it is windy! Denmark is flat, so no natural obstacle to the wind. And being in-between the North- and Baltic Sea there is always wind. Luckily it is mainly coming from the west, but it can be tricky, turning even nerve-wrecking. Frustrating. Because we are talking harsh winds. And when you go direction west prepare, physically as well as mentally. And prepare, when it rains it rains. Though in the end, you rather have a maritime condition, meaning, when the rain starts, it rains, but may stop shortly after. So don’t get frustrated, from sunshine to heavy rainfall you may experience any weather condition each day. But there will be almost daily some rainy patches to weather. 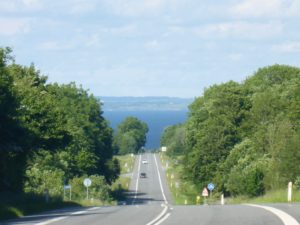 When thinking Scandinavia you think ecology, but I had to be proven differently when considering Denmark. There is no separation of private garbage. Denmark is basically third in the world when talking ecological footprint. After the US and UAE. Yes, they have a wonderful well-fare system, all nice’n easy, but if the whole world lived like the Danish, we would need 3.9 earths to cater. I would not have guessed. The world’s average is 1.3. That was a real surprise to me. I would have thought Denmark is a leading ecologically nation by conviction, but far from it. So, as much as it seems to be an eco-friendly country, no, it is not. But I had the impression, most Danish believe the are. 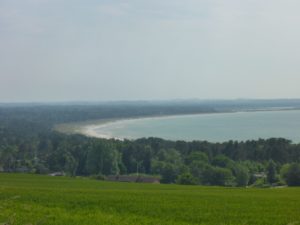 Also pricing. Denmark is expensive. VERY expensive. I understand, VAT covers the well-fare system, but at most of the times I could not see the value-for-money. More than €20 a night for a tent on the camp-site, ferry tickets on a level as if using a ferry with a lorry, though us being on a cycle. Difficult to accept. A pizza for €25, and me talking about a Margherita, not pizza de-luxe. Hot-dogs, which is a bread-roll and sausage for €4. Well, as much as I loved cycling around and watching the scenery, pricing really kept my enthusiasm at bay.

But after all these rather negative points, it is definitely worth cruising around Denmark by cycle. The hilly country-side is not so much spectacular, but really nice. Very lush and when knowing, Denmark is dominated by rather dispersed settlements, most of the time you really feel “out”. And being alone is something I am after when doing such a trip. Infrastructural-wise Denmark is great. When passing the Belt, there is a train every 30 minutes, when island-hopping just turn up and a ferry will depart shortly. Though when it comes to supermarkets, you better be advised to stack up food regularly, not knowing when the next shopping opportunity may turn up. 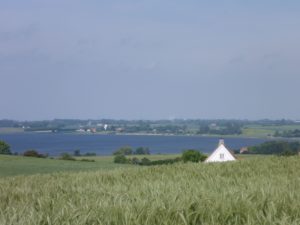 The camp-site are all well-equipped. That is really cool. There are sites abound and for a tent they will always have a place for you. Denmark being a major destination for campers you may think you have to book in advance, but no need really. Only a few will not be able to offer a place, but when being on a cycle and in need for a small space for a little tent – no problem! 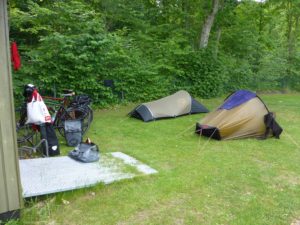 But you may have to freshen up your Danish before going. Despite almost no foreign film on TV is dubbed, most being in OV with subtitles, I was surprised about the low level of English-speaking capability. Who knows, what importance of the national pride plays a role here. But quite often we ended up in situations, where our English was of no use and we had to use hands and feet to get us understood. Speaking German is much more helpful than English. 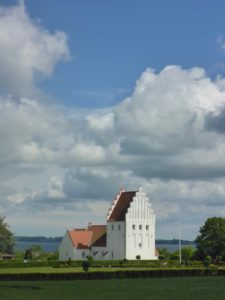 So, in the end, is it worth going? YES! Just overlook the inconveniences, don’t talk politics and you will really enjoy the country. For a cyclist the country-side is easy to manage, only a few hills to mount and descend. The highest elevation in Denmark is only 170m. And it is easy to void it being located near Skanderborg. Distances between cities are not too far, just consider an average of 20Km between city to city and you are well advised. But in-between, there is almost nothing. Just you sorting out life with cars, lorries, the wind and your own psychological state.