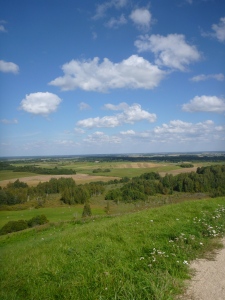 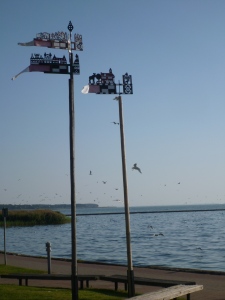 Lithuania, a country on the outskirts of the EU, member of the Baltic tigers, small but beautiful. I once called it a ‚mickey mouse country‘ and after having been there several times, admittedly that is wrong.

The Baltics were the first ex-CIS countries joining the EU and taking up the European ideal into their hearts and life. They practice the flat tax system, are forerunners in adapting new technologies into their daily life and developed a deep sense of national unity and consciousness.

When travelling through you see a lot of wood, small villages and a hilly landscape. The difference between towns and the rural area is huge, though there has been a lot of development over the last years. When I was here first time almost 8 years ago, on the countryside the people were still carrying hey on wooden trailers dragged by horses which has changed since. This time when I was here, I did not see it anymore.

Roadwork all over but still, it is not very comfortable to travel as most in-town roads are in a lousy state plastered with pot-holes and bumps. Across the country you have hardly any motorway apart from the connection of most important cities. The rest is just a single-line highway where overtaking turns an adventure each time. But things are changing and I would not be surprised if it all settled in 10 years time.

When strolling through the city you find it departed in 2: the city centre newly built with shopping areas, newly made boulevards and glassy facades. Marijampole, Vilnius, Klaipeda – these towns have been built with new-fashioned architecture. The suburbs still covered with soviet-style housing, lousy streets, dotted with supermarkets, fitness centres and retail-outlets of all kind being situated in ground floor flats turned shops. There are overland electrical wiring for public busses and tracks of the tram bedded mostly in cobbled stones.

As for ancient architecture I either did not see it or they are simply not existent. Old towns such as in Riga or Tallinn I have not seen.

Outbound highways are speckled with hypermarkets of the newest kind and all major western European chains are present. You only find few local or national outlets such as Rimi, Maxims or other. This is the result of the Baltics opening up and entering to the EU, when the established western brands just spread east and took their space before any local brand could develop and impose.

People are nice and respectful. Only the young are able to speak English, with the older you have to go with in Russian. Whilst the young seem to entirely embrace the future and opportunities of the new politics, many old seem to be on the loser’s track. The young behave, dress and move like their western peers, the older seem to be lost with habits still from the old times, clothing a bit backward and sticking up with drinking much alcohol, plastic shopping bags and funnily coloured hair trotting the streets.

But they most welcome strangers and feel altogether very proud of being what they became: a full member of the EU, it’s ideals and challenges.

When you come to Lithuania, check the towns for a day or so, but then go rural – this is the real Lithuania. I went to Neringa, the Sylt of Lithuania. A wonderful peninsula. White beaches, sand dunes, pine forests and a dead forest, laid back and built as you would expect any tourist place to be. Cosy hotels, nice restaurants, protected wooden houses in red and blue and a few bars. Not more not less, but a great place to be to relax, step aside and lean back. Pricing is more than the average but still less than on Sylt.

After all this country has my full respect. They took up the opportunity of being member of the EU, and once the Euro will be adopted coming January, this country will move again forward and become better and better. The population is eager for it and with it’s openness to the new, who knows, they may even overtake a few of us westerners.

A great thanks to Agnes, Amelia and Mindaugas – wonderful people, the heart at the right place and it is they, who showed and introduced me to their country. There is much I would not have seen without them.