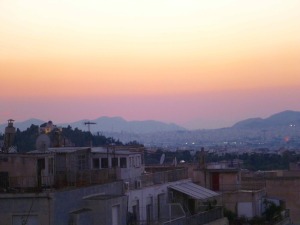 Whenever you think about Greece, you think of a blue sea, white villages, seafood and Syrtaki. Lately all media were full of reports about a corrupt state system, overpaid civil servants, voluntary inability to adapt to the new and a society giving each and everybody but itself the responsibility for the current national mess. For outsiders it is very difficult to perceive a coherent image: being a friendly tourist destination versus a country on the brink of total collapse.Follow the news and you were swamped with reports about a deep-rooted crisis hitting all corners of social and commercial life. Greece has been submitted to the decisions taken by the Troika. Many consider Greece the country being responsible for the European financial crisis. It faked its‘ numbers in order to access the monetary union but once in negligence and waste of finances was widespread.

There were stories about a village with 500 inhabitants housing 500 blind in order to dodge the social welfare. A right-wing extremist party is on the rise and pointing at foreigners for being the reason of their demise. And above all, many stories about individual destinies of having the salary substantially cut whilst experiencing huge tax increases. Employment is high, disillusion is widespread and a high suicidal rate persists.

Being here as a German does not make things easier, as Mrs. Merkel is blamed as the main responsible for the national mess, or for at least for not giving the Greek the chance to rattle themselves and sorting out the troubles.

But let’s face it: all this is the official political side to the story. I understand the mess people are going through, but it is not my issue and I firmly believe, if there you have a problem you have to sort and find solutions until the solution is found and put into practice. In addition to that, I do not feel guilty at all to the local problems. I understand both sides, but again, pinpointing at a scapegoat is not the solution.

It is difficult to compare as I was once and only in Greece, and that is 10 years back. 2003 when I visited Greece it was before the crisis and I returned twice, 2013 and 2014. Somehow I tend to say I don’t see any of the mess though I know the country and its‘ society is undergoing tremendous changes and has to live up to major challenges. To me restaurants seem to be full, but they must haver been fuller before. Copycatting Berlusconi in stating ‚there is no crisis, as the restaurants are full of people‘ is no option either.

You see life on streets, and the noise speaks of activity and life. Obviously it is noisy. It’s chaotic, dirty, there is a mind-puzzling grid of mini-streets and lots of abandoned dogs abound. But hey, do we want the entire world being Swiss-style? Though nothing against the Swiss and SwitzerlandI meet a lot of people, during business and privately, and I only would like to quote one: „the normal guy knows whose fault it is!“ Nobody gave me even the faintest idea it could be ‚my‘ fault. On the contrary, when sitting in a bar I got to know an elderly gentleman who saw me being German and who cherished the Greek-German friendship. He was living in Germany and appreciated much the German society being interested and fond of old classical Greek theatre, which at that time he was promoting there.

But the longer I am here, the more I realise the crisis by scarcely populated bars and restaurants, specially late at night. Instead though street life is vivid with folks wandering around with bottled or canned drinks until midnight. If you really go into town, you can experience live street music by DJ’s, left-wingers posting anti-fascist billboards, old ladies feeding cats, a politically activist youth, people hanging out and talking, playing football, just being together. For me as an outsider, It is confusing to witness such scenery in the middle of a crisis ridden country with little hope.

As much as I tried to feel being made „responsible“ during many meetings or random encounters, I cannot get such impression. The Greek society is redefining itself and most have no choice, there is no option, no alternative. Suicide is t no option though Greece has maybe the highest suicide rate within the EU.

Being strongly submitted to real-life Darwinism, all are trying to cope with their individual fate. Small businesses find new possibilities through finding more and more opportunities. Young people peacefully hanging out in parks and places. Certainly spending less, but nevertheless being outside and enjoying life.

A hotel in the anarchist area of the town impresses you with many different things to discover as spending your time in a classy hotel anywhere. For sure, the local business here moans about recent riots, but to a certain extent, isn’t that also an integral part of any metropolis, and specially Athens with such size and history?

Talking about history. The country and Athens has a long stretching history of 3.000 years exceeding. There were many up’s and down’s. And Greece will manage this crisis. After a decline rising is the only option. Can it get worse? You may not believe in economic cycles, but this is the case.

During my stay I criss-crossed the town several times and I am more than impressed to see modern architecture next to building as old as the entire history. Check the Acropolis, the Olympic Stadium, the many statues, portals and much else. I cannot get enough in realising, how varying Europe is, how much history we have, how different one place to the other.

Personally I don’t care much the Greek islands, but you go to Delphi, Meteora, the Olymp, the Vikos Gorge or Halkidiki and you can just be amazed about this country. This country drowns in history. And let’s not forget: democracy was born here. Not in Germany, not in the States, not anywhere else. It was born here. And this is why we should cherish this country and giving it all chances and possibilities to stand upright again and become a fully respect member of the world community.

I want to say, notwithstanding all inconveniences and problems, I was always greeted with hospitality and gratitude for giving them a chance and support to develop and regaining some kind of optimistic and constructive future prospect they can be proud of. And this country well deserves this.