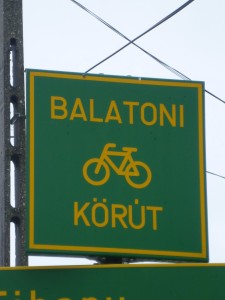 It is a nice and easy ride around the lake. A good plan of activity in case you are here for a few days only. If you don’t know what to do, get a bike and go for it!

The villages and towns around the shore of the lake are typical for any tourist destination with lots of restaurants and the such likes. It seems early May the summer season has not yet started. Not many people around. So a good time to go for a ride. Later in summer it will certainly be jam-packed and it look like around the Alster in Hamburg on a sunny Sunday. 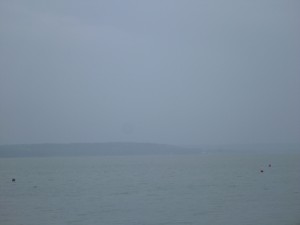 In my case it had been raining for more than 40 hours, and under such weather conditions cycling is just no fun. Normally weather is of no argument as it is just a question of clothing, but finding the motivation to set off is almost impossible when pouring cats and dogs.

On Saturday morning though it was time to leave for a meeting in the evening in Kesztely. Though dragging my feet doing this and that, packing my clothes, having another coffee. At 11.00 am then no more excuse an I set off. Quite a challenge after 3 weeks or partying, drinking and, most importantly, smoking!

My legs were heavy, the mind was wondering what I was about doing and my whole body was aching. After a few kilometres a sign telling Kestely was just 67 kilometres away. A piece of cake? That is my kind of training distance on an average day. As usual I took nothing to drink and neither to eat with me. Let’s appreciate what’s on offer in the side streets.

As usual also no map with me. The case is simple: the way is nicely signed out. There were only 5-6 situations where the signing was not too clear. If you go anti-clock wise always keep the lake to your left. If you find yourself with the lake on the right you are wrong. 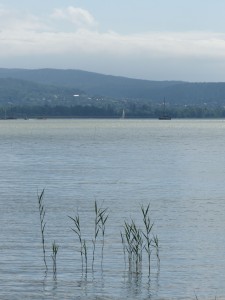 The path follows a certain pattern, so if you come into one of these situations, just stop and watch around carefully. The relevant sign may be behind you and you had missed it due to whatever reason. And if not, just trust your gut-feeling. Following that pattern the path lines along the shore line. You will understand the character of it after a while. Even if you think you may have lost it, don’t worry. Stay close to the lake, after a while there will be a sign of the „Körut“ again and you then back on track. 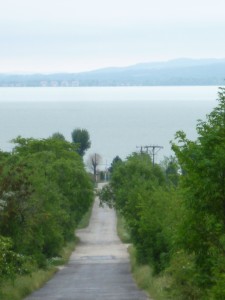 The northern stretch of the lake is a bit hilly, but all athletes shall slap me. It goes a bit up and down, but, really, nothing serious. Nevertheless, for me after the last period of sportive inactivity quite demanding. For a trained person though nothing really.

Take your time at a local „Lebensmittelgeschäft“ (many things are signed out in German and most speak it even!) to prop up on food and drink, check out the little restaurants, but don’t expect a historic medieval setting. None of it. 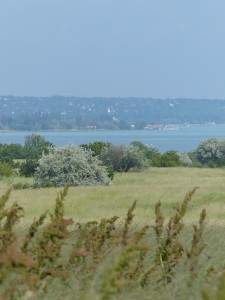 Lots of country-homes for the Hungarian middle-class (mainly along the south shore). Quite a few dilapidated Soviet-style buildings. Army caserns, hotel complexes and some kind of fun-park here and there do change the endless dacha colonies. Here you cycle through one area of weekend-houses after another. Whilst the northern shore is kind of hilly, the southern shore is steadily flat.

So the planning was right: Saturday doing the hilly northern part and the flat part the day after. 85-ish kilometres the first day, 120 the next. And the lake was done. 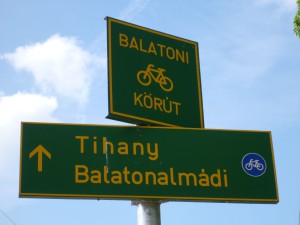 I was lucky with the weather. Thinking about this trip for a few days, I had to wait a couple of days to get my acts together. But the moment I started hitting the road, it basically stopped raining. There were a few patches of rain here and there, but nothing serious. Sunday it was just sunny and not too hot. Perfect conditions.

So for anybody being down here and not too much into sun-bathing, cocktail-sipping or doddle-doing – get on a bike and schedule 2-3 days for a ride. Nice places to see, often enough far away from all the hype and lots of nature, despite being nearby all tourist craze. Hanging out in any town on the shore is just no option considering their overall character and things on offer.