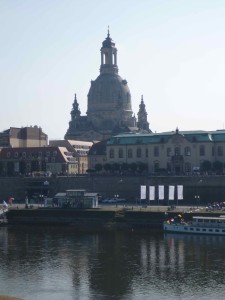 I have never been to Dresden before and I actually had no idea what to expect, apart from a city destroyed by the war, run long-time under socialist rule and now rebuilt since reunification. I was positively surprised.

When you never had any family or friend’s ties to the Eastern part of Germany you are full of prejudices because there has never been a reason to go to. In former ties it was just too awkward to cross the border, and since the fall of the wall, there is just no reason, you prefer going elsewhere in the world. Which is a shame actually!

Your opinion is media-dominated and your lack of personal experiences does not really help. So the outlook and expectation is to go to a place full of soviet-style apartment blocks and tram ways with overhead electricity wires. And indeed, when you approach city centre much of it looks like this. 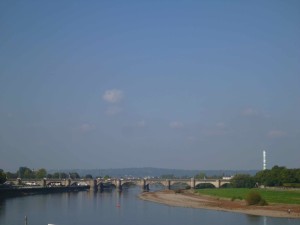 But the outskirts have changed a lot and there is no more difference between the suburbs of Dresden to any other German town. Townhouses, shops, supermarkets, bus stations – you name it. And it is simply impressive to realise what has been achieved since the wall fell. Specially for me, as I have driven through a lot countries of the East recently, through countries which went through the same kind of history, though the changes have not been that much obvious and profound as it is here the case.

Dresden has been an important town in past times. Royals, politicians, artists and business alike all made of Dresden what is looks like and shows up as it does nowadays. Royal courts, the Opera, impressive churches and museums of various kinds. It is obvious why it is called the „Florence of the Elbe“, when you look at the skyline composed of many old fashioned domed buildings. 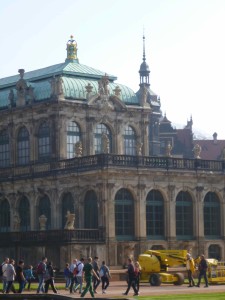 We took a room in the AO-Hostels. An inexpensive alternative to the quite costly hotels abound. Though you have to like and not mind the many youth and lots of school classes doing their week-excursion into Dresden. The service is poor, but the idea is not being serviced. You have your room, and two days later you check out. End of story. But it is near the main train station and for €75 a night a good option if you don’t mind walking 15 minutes into the centre. 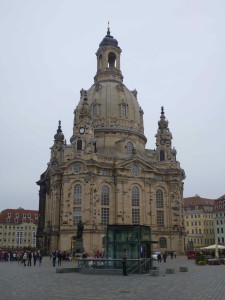 I very much liked the Frauenkirche. The rebuilt version is a nice match of what it was before. Rebuild in the nineties it is composed by old rubble, which has lain around as an anti-war memorial since the end of WWII. Though lack of funds to rebuilt was also a major reason for not rebuilding. The light-coloured facade is interspersed with lots of original stones, which have turned black since. A wonderful idea. 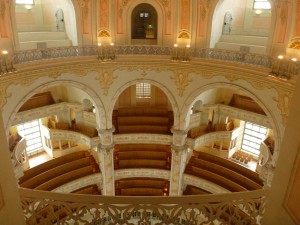 The interior is different to many churches, which go by length to house all people attending the church ceremonies, whilst here you find tribunes in several stages. Very nice. 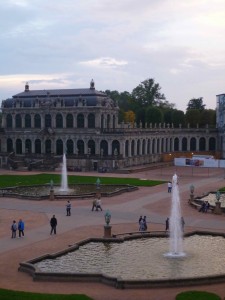 And don’t miss the Zwinger, an old royal domicile of the aristocracy, the Semper Opera, and the Chalet. You may be a museums fanatic, me ain’t, but the pieces being exposed here are frankly speaking very impressive. But that is true for any museum, isn’t it? 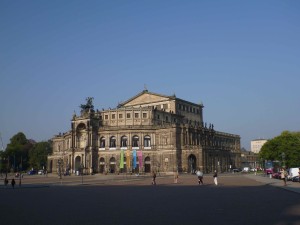 Walking about Dresden is my thing. Just bear in mind, Dresden was one of the most destroyed cities in Germany after the world war and look at it today. Obviously, you would not expect differently, but still. Today, there is no difference and hardly any sign of the destruction. You may say this is the case for any West German city, so why the hell fuss about? Here most of the setting was soviet style and not really looked after, not mentioning the lack of any optical elegance.

Now, since unification Dresden was one of the major towns receiving loads of funds to restore and rebuilt. And the result is outstandingly impressive. Being the capital of Saxony may have helped, but we visited a fully restored and genuine major town. Shops, culture, politics – all here as if it was never gone.

It is said Dresden is a town full of students. We did not have the time to check out, but the town is full of young people, loads of billboards indicating a healthy social life and wherever the town feels vibrant and alive.

So I will definitely come back here and check out more than the usual stuff we saw this time! Concerning Dresden, will certainly keep you posted!