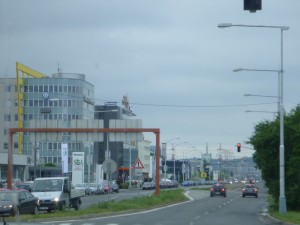 Today was another jog scheduled but I missed it to do. To much beer for being motivated going for a jog at 6.00 am in the centre of town and I just can not be bothered to get me up and running. And the Elbrus comes closer and closer. In addition to this we used tonight a parking for lorries. Directly next to a steel factory. Hammering noise throughout the night woke me up several times. But still, a nice atmosphere. A feeling of Flashdance?!

The place was amidst enormous factories dated from Soviet times and looked, as if nothing had changed. Industrial architecture in its crudest form. The step to romanticism of industrial art is not that far. You can quite appreciate this form of expression, if so to call. The structures are huge, and I find it astonishing what human mankind is able to create.

Today we had two meetings scheduled and they were quite all right. Even if you have a good and vivid business relationship, once you meet face to face you always detect more potential for developing additional business.

Though going places following your navigation can be tricky. When going to the second meeting we were just about to arrive when we had to cross a bridge with a maximum weight allowed for a vehicle to pass signed out with 3.5t. Too less for Hubert. And I won’t take that risk. So all back again and approaching from the other side. But eventually we arrived. And these were the meetings for the day. But I have to get myself a navigation suitable for lorries.

This time I do less than the average 5 meetings a day, but the quality of the few meetings we have is outstandingly good. Unfortunately 4 of the last 5 meetings this week were cancelled, so all had to be reorganised.

Anyhow, a meeting in Bratislava is still scheduled. So off to Bratislava. Coming to the border I had to register for the toll-box, at least I thought so. I faced pure bureaucracy. Arriving at the office I had to queue up with quite a few other drivers and it took me an hour and a half to have my turn. And believe it or not, they were not sure if to register me as a bus or lorry. But neither I am. The Slovak toll system does not foresee a caravan to take such a box. In fact they do not foresee any caravan with a weight of 7.5t.

It took the ladies 35 minutes to sort my case. To my advantage I was told, I just have to buy a vignette and no toll box, despite Hubert weighing more than 3.5t. This is the limit for qualifying to take such a box. As happy as I was to get off the hook almost for free, the worry I had was what if being stopped by traffic police claiming I had to buy a toll box? I am still doomed by my Polish experience.

Luckily the ladies understood my concern and handed out their phone-number I should call in case I was stopped. Luckily this did not happen until we arrived in Bratislava. So for all of you exceeding 3.5t caravans: make sure you get the vignette only but reconfirm at least once that this is the right case.

My colleague left early for home. There is no need for him to stay for no meeting. So now I am on my own for the next ten days. 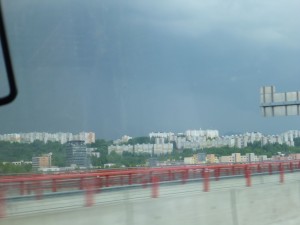 Approaching Bratislava is a setting as any east-European city with post-Soviet architecture. Massive concrete buildings housing hundreds of people. I wonder why Parisian kick such a fuss about their „Cité des 4.000“ … there are more than many around here with at least that size. Though it is said, Bratislava’s old town is quite nice. I had no time to check this myself. The outskirts are not very attractive to say the least.

I stayed in the city’s campsite near the airport. A bit run ´down, but all facilities on offer, a good restaurant nearby and a safe place for the night. 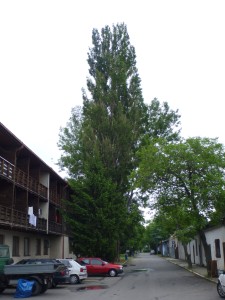 The weather is nasty so cycling into town wasn’t an option. I just worked another hour, and luckily the Wi-Fi worked and I was able to work down my mailboxes. Though I had to sit near the entrance to get full reception. But it was for free. No complaint by me.

To finish the day I went into the nearby restaurant and had a ‚devils rump steak‘ – very tasty. And then the day was done. I am looking forward to the coming time on my own. 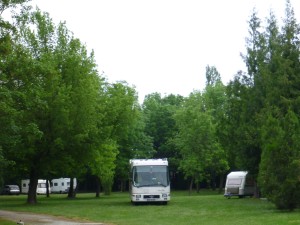