The Camargue is one of the French regions I somehow always knew about and wanted to go, but never got my head together going there. Now the time was ripe, I had the opportunity to stop over in this beautiful place and hence did so.

In between two meetings I had a couple of days time to spend and went to Saintes Maries de la Mèr, a small and cosy town right inside the national park on the coast. Being a bit off-track, it is still a good starting point for daily trips to Arles and even Avignon, in case you travelling with a car. Going early spring is a good time going there. When lucky, it is sunny and rather warm during daytime, though at the night it still gets chilly. Not yet the overheating summer periods later in the year. 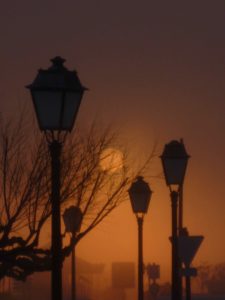 The weather was good, though as long as it does not rain, I don’t care about it anyway. When arriving with your mobile home, when you enter town right at the round-about you will find nice camper parking place. €13/day is a bargain. Being just 300 yards off the centre it is in walking distance to shops, restaurants and the beach. Apart from a toilet it offers no facility, but as it is close to the town, it can’t be better. Though, considering the overall size of Saintes Maries de la Mèr everything is close to the centre!

When arriving I decided having the dine at “Les Embruns”. When checking it out initially, it looks average, but I was surprised about the quality of food. Did not look like when arriving and I would not have guessed. The staffs are nice and when I asked to get something not listed on the menu, it was no issue at all. I wonder though what happens to this request when peak-season?!

Generally though you have to get used to French pricing. Fuel about 30% higher than anywhere else in Europe and the heftiest toll-cost across the continent. Not funny! And when rolling along quite bumpy motorways, I really wonder, what they are charging it for? Cannot be for the maintenance! I personally find the fuel stations a bit complicated to orient on-site and every second parking place was closed. I think this is for refurbishment after the winter season, but who knows. 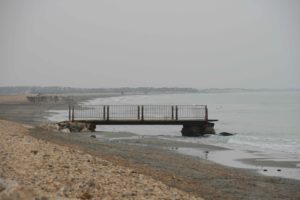 Anyhow, here in the Camargue, on my “day off”, I decided to cruise around the Etang de Vaccarès. And at this time of the year there is hardly anybody! You are on your own. Leaving the town I went anti-clockwise and passed the dike. Easy to pass with a regular bicycle and a good choice to have an appropriate first impression of the local nature here.

And there we go: you may have heard a lot before, and would you have guessed it is true until you see them? Flamingos! The only wild existing population in Europe. Pink flamingos. Looking at them you cannot avoid feeling being in a zoo, but far from it! You are in the wild and are watching a wild group of flamingos. Strange impression. As if they do not belong here. But there they are actually. The same feeling I had when seeing wild zebras in Africa for the first time. You really have difficulties to overcome the impression of not watching “funnily coloured horses”! 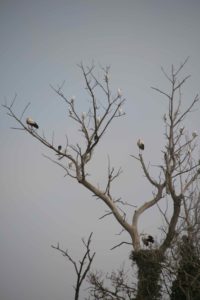 I continued the D36 and D37 until hitting the D570. Until here all nice, a small country road, nice places to stop and watch plus a few restaurants here and there. The D570 then is rather busy, but there is a cycle line, so it is not as bad as riding on main streets in the Alps. But know: landscape is nice, but not as spectacular as you may expect: it is rather flat and during this period of the year rather lonely. At least you can really speed up with your bicycle. For my gusto there is no risk to miss anything: fanatics may hit me now, but see the dike, the flamingos and a few other things, otherwise just hit the road and speed up. Cool thing to do here.

Of course, it is a nice place, wonderful to look at, but the obvious spectacularity is missing, though it may be hidden in details you have to know. There are ornithologists all over the place and landscape fanatics, so there certainly is something about this place. For ma a very nice place to relax, enjoy and calm down. Around on this tour you will find places to stop for eating, watching and relaxing and lots of horses and bulls, the other two symbolic (almost iconic I think, after I went into a souvenir shop …) animals of the region. 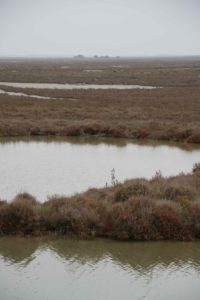 Unfortunately I did not have the time to go to Arles and Avignon, two other places I wanted to see for a long time, but that is for a later moment. But the Camargue is a seriously nice place to calm down. When visiting the Provence, the roman towns around, or when being on a passage East-West or vice-versa, schedule a break, two nights … it is a really nice place to check out.

But as the whole region has to offer a lot, so schedule three four days before moving on and checking out other nice regions and places to go nearby.