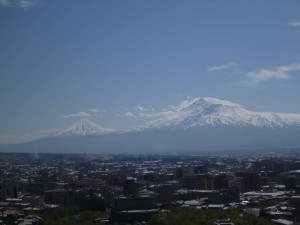 Considered to be one oft he poorest and war-struck countries of the Balkans I there went with mixed feelings. But it is as usual: the reality has nothing to do what you read in newspapers or hear in the news.Funnily enough, I had no other chance than taking a flight getting me there by 4.00 am in the morning. When cruising by taxi towards the hotel one thing hit me first: there were almost no streetlights. We cruised through a pitch-dark city with hardly any traffic but full with late-night bars almost next to each other. Different country, different habits. 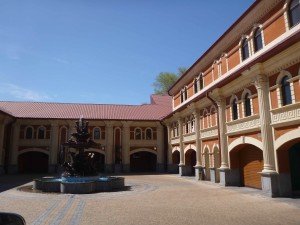 I don’t like staying awake through the night so having a nap first before stepping out into spring-like Yerevan. Hotel Roma is a nice place, but very much Louis IX-like and a bit plush here and plush there, but very friendly and the staff most welcoming. Actually, each and everybody we met in Yerevan was outstandingly hospitable! 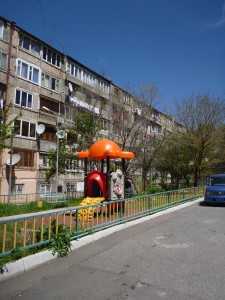 As usual I took a taxi getting me for 3 days around town from one meeting to another and from the first moment it seemed, he charged me fairly. Though a taximeter was not installed and getting receipt is apparently an unusual thing here to do. But over the three days we developed a nice relationship with the cab driver and had good fun.

The town is quite green with alley trees everywhere. Coming from Cologne with almost minus degrees this moment of years I enjoyed going around in a suit or pullover only. Though in general my impression of going to the Balkan in mid-April is a bit too early. One month later and by nature it would have been perfect.

The architecture of Yerevan is a bit soviet-style but much less ugly than many other cities in the East. Lots of little shops everywhere and people buzzing around wherever you go. A very nice and pleasant atmosphere all over.

Wherever we were received we were invited for a drink, a snack or lush eat-out. Actually the food is nice. Most people talk about the Georgian kitchen being best of the world, but the Armenian is no different. We tried a few minor restaurants around town and food is nice everywhere. I love the thin white bread you roll up with goats cheese and different herbs. Go for the soups and Shashlick. Amazing. Chicken soup was not really my big thing, as with cooked only chicken I do not feel so safe.

If you have the chance go to the Pandok in central town. Easy to find on any restaurant guide, but nevertheless worth a go. Have a nice dinner there, then go to Freedom Square, where you find many small cafes built in a tent-like Bedouin style for chilling, sipping and smoking your Shisha. I just love it. Price-wise all ok.

Strangely enough you can get even good fish here. We went into a restaurant about 10 KM out of town. They breed their own fish in open tanks. Sitting in little huts sprinkled around the place you can enjoy your stay and just have a good time whilst the sunset comes along. Ordering is a bit strange, you actually have to call the waiter by phone, but hey, that’s a never had before for me.

If you don’t fancy a proper dinner and just hang out for snacks and drinks check out Isahakyan street. I went into a bar across HSBC-bank 100 metres down the road. Big fun. But just wonder around this area, you will find lots of venues from pure beer bars to posh Sushi to hang out, chill and snack some stuff away. 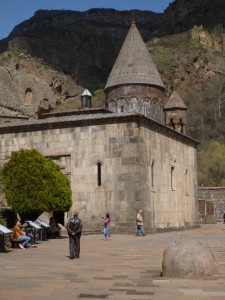 We even were invited to see some of the country and went out to the Geghard monastery. I have to admit I am no architect or archaeologist being genuinely able to accordingly appreciate and cherish the value of such place, but it is worth a go. With car just an hour out of town you can visit this place, which is in fact not a built place as usual, but a church built into the rocks of the mountain. A bit like Lalibela but wholly different. 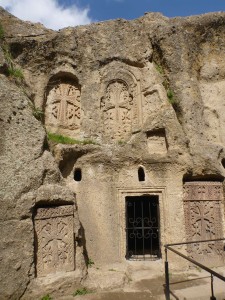 Another thing which amused me much in Yerevan is the behaviour of conductors when approaching zebra crossings. In case they see somebody intending to cross they always stop. Even if an 8 line street and still dozens of metres to go. They stop. And starting off at the lights, …, everybody awaits the green and will not howl up the engine if the yellow appears. Funny. Laid back. No stress. Just nice.

There may be corruption around, but I have not had any chat with anybody complaining. The country seems well balanced, as there are no behemoths monopolising the market and feeding lots of little ones with crumps dropping off the table. Each and everybody seems to have found it’s place and seems happy with the market and overall situation. 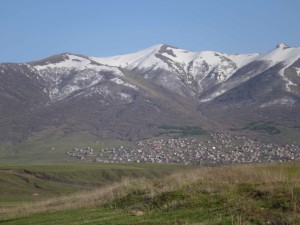 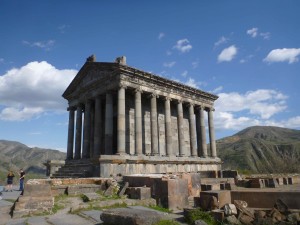 I really had a good impression of the country. It is nice and clean, people are friendly and seem quit laid back despite all the buzz each and everywhere. Next time when I go I will definitely choose late spring of early summer, as the nature seemed still asleep and dull. And in the evening it turns quite chilly. It was a month too early to go and really go for it.