You always wonder, what the European idea is about, and in my opinion it is about the people. People, people and again people. And in the end we Europeans are all the same with same ideas and values!

Leaving Transnistria and Moldavia I had a smooth border crossing, but my left front wheel started really worrying me. I kept driving until Vaslui where the noise really turned worse and I decided to look for a garage. I found Automeister and what followed was having an initial chat and explanation with Vlad from reception. 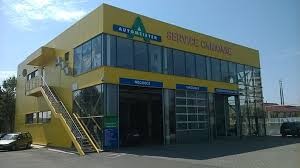 I laid down my problem and he organised a translator before we started a test-drive. As it is always the case when you want to demonstrate something – it does not show. The road was just too good. So we went into a very bad side street and there it was – the subject of concern.

We went back to the garage and starting seriously checking what’s up. Hubert was put on a rattler and was checked thoroughly. They found the noise – the lid of the axe was detached. I was quite lucky, because the grease leaked out. If I could have gone bad with this in 1 or 1.000 more kilometres is difficult to say, but if I had not done anything, the worst would have come to the worst.

They fixed it tip-top and I went for settling the bill mentioning I wanted to give some tip to the mechanics. After a few moments Vlad printed the invoice, tore it apart and just took the Euros I wanted to give as a tip. He declared it a present to me. A present from Romania and I really felt touched.

This is what Europe is about. Not that financial-commercial-political shit. Europe should be for and about the people. I am more and more impressed by the little differences between the European folks and the similarity between all of us. I cannot enough express my surprise, gratitude or simply respect for somebody, who I would not have expected to be so.

And that was it. A big farewell and off towards Cluj. Though I discovered some oil below Hubert’s engine. I started worrying about the oil levels and decided to go soon to an official MAN representative, which was supposed to be in Cluj. Though my navigation did not know the address.

After 2/3 of the distance I made a break as usual on a TIR-parking and when I left next morning I saw an elderly man hitch-hiking. I decided it was my turn to pay back my Romanian dues so I took him with me. And obviously when he got off and wanted to pay I denied. As a side-note, even him, in his age, he tried to communicate with me.

A land very hospitable and full of surprises I had not expected to experience.

In Cluj I had a good trip around with a cab driver who tried to talk to me in five languages and we had good fun. You have to take and appreciate the moments as they come and how they come.

The meeting in town were so and so and I cut them short to the most efficient and necessary. After all meetings passed I left for my next stretch of trip direction Vienna when I found MAN by accident. Nice and cosy next to main road.

I stopped and registered for checking the oil. The gearbox oil was all right, but not the engine oil. Also here only thorough workmanship to report. They changed some fuel pipes and organised from nearby a new oil filter.

I told them to just use the old one but they insisted to try a new one. Which when arrived was found to be too big. Three hours waiting for nothing. The job done was good, but they did not have the idea to offer a coffee or something. Not nice but maybe the standard. They should change this habit and turn it into a service tradition.

But now Hubert was ready for his last kilometres to come. Wheels ok, oils all right, just off we went. Hubert is really reliable! And what a treat to be out and just enjoy life.