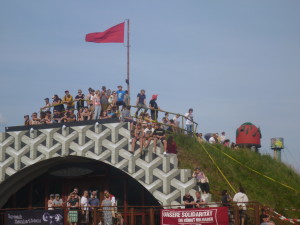 Each year 60.000 people meet on a festival in Müritz region, east Germany living the idea of a communist dream.

It appears, as if the place is burning. Smoke is rising in the remote area of Mecklenburg-Vorpommern. Lights are shining bright across the old military air base Lärz. Cars queuing up for reaching the compound despite being 5.00 am. It is cold, fog all over. Folk sitting in the car breathe in the sight of signposts and costumed people.

It’s Fusion-time. Since 1997 this festival has been attracting year on year in June dozens of thousand of people to the small village of Lärz. A guy with security clothing at the entrance explains this is not a simple festival, it’s an attitude. Attendees call themselves Fusionists.

One is controlled if in the back of the cars people hide avoiding to pay entrance. But if you offer a beer, the control is not as meticulous.

Maybe such bribe is part of the game. The theme of the biggest summer camp of the republic is „part-time communism. The organizers according to their website reach to create a world apart, a place without time, a carnival of the senses.

Streets on site have been named Lenin-Allee and Ulrike-Meinhof-Straße. Houses called „Employment agency“ where tickets can be earned. Dancing in a hangar called „Datscha“ or in a tent called „Palast der Republik“, purchases done in the „Konsum“.

The world outside the barbed wire is considered bourgeois and capitalistic. Even skeptics earlier laughing at it now find themselves being happy with all going on.

That the Fusion is still up with the old ideal of communism is due to the organizers, who cheaply bought this old Russian military airbase during the nineties. Until today they decline sponsorships as well as any marketing support. Media presence is categorically refused.

Most bands play without being paid for

Each year 100.000 apply for a restricted number of tickets. 60.000 are given out through a ballot. Most of the bands play for free, knowing their success is due to this festival being the place to play. The Fusion is the main stay in electronic and Techno-style music since many year.

Two years ago the idea came under threat as more than 10.000 climbed over the fencing, avoiding the entrance fee, but causing grave injuries such as broken hands, ripped of fingers and causing huge delays for others to officially entering the area. The dram of fair play and open borders had been blown.

The organization committee wrote: „you have taken the illusion the festival could work without controls everywhere!“ Since then the compound is fenced with barbed wire and the pricing has been increased.

Nevertheless, people hold on to the utopia to rest a few days in a better world. They discuss about anti-fascism,, freedom of the Ukraine or simply move next to each under hammering beats of various places of music.

Hipster, raver and newly defined hippies smile at each other. In case of urgency they help each other if after a night of dancing and much consumption alcohol one does not find his tent.

A chap on a hammock opens up a beer, a few yards away an elf-like lady is dancing away, eyes closed.

There is no real time plan during the festival. There is always somebody preparing the barbecue, brushing teeth or opening up the next bottle.

For the sleepless there are many lampions and things colorfully alight. Fire artists show their performance, mirrors in trees reflect the lighting.

Here and there one on a bicycle drives by, stand up artists perform their play. People run around dressed as dwarfs, Indians or circus directors.

Many turn up in groups of people, but each and ever is participating on it’s own. There is no violence, no criminality, but much hunger for love and hugging everywhere.

The end is never nice, reality is catching up after 4 days living in a bubble. When leaving the compound, a guy yells „hand me your drugs, better to me than to the police!“ When leaving the you have to pass several police check points. Their success rate is high.

But never mind. When reading the festival guide you get concrete advise, how to behave and what are your rights, when held up and being checked. Alternatively, just check around, many offer being your driver for behind the control.

I made it through, but anyway, I did not have anything to fear. See you next year again – in case I am lucky!