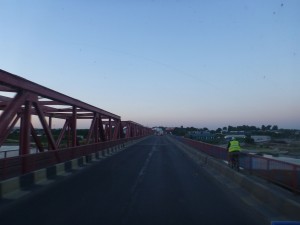 When you do this trip, go definitely via Buzai and Hosi. The road is perfect.A flat landscape, good road conditions with 1.5 line per direction and absolutely smooth to drive along. But beware the traffic! Cars keep overtaking under any circumstance and don’t give a toss if someone is coming opposite direction or not. Also beware people by foot, cyclists and cars parking alongside the road for doing some shopping or simply having a break down. It will not be signed out 200 metres in advance as we are used to in “our” world”.

As there is not much to see you better decide for this way to go. The conditions are just easy to ride. There are enough fuel stations, but watch out to anticipate your road toll. At specific toll stations or fuel stations you can buy daily tickets which are valid until midnight the booked day. At the border crossing Romanian side just at the last fuel station I did my stop overnight and had a good sleep.

Waking up at 6.00 am and jumping right away behind the steering wheel I was supposed to pass the border when I was stopped by traffic control asking for my toll being paid. I told I had arrived the evening before and had a sleep before continuing my journey, but they insisted I had to pay toll even for the stretch of 200 metres to the border control that day. I was under Polish-style threat to be charged with 500€ for dodging the toll, though they confirmed they had seen me arriving and going to bed.

They insisted I had to pay and I started the discussion about the all too obvious ridiculousness. But they played out deaf on it. Insisting they would not mind but their boss would, and hey, what a surprise, he was just about to arrive. One word gave another, I told them that cannot be serious, as they knew my arrival and all.

They stated „we can not let you go like this“. Blime … so I had to bribe. Bosnian style. I grabbed into my pocket and took all I had. 150 RON. Laid them on the floor next to my seat but the chaps playing the helpless. How can he take it without being noticed here in, remember, barren land?

So I took the initiative, took the money and gave it to him. And he let me off the hook. From my side no complaint, it is as it is and this amount is nothing for me. I have to assume responsibility for my action, but 500€ would not have been ok, not for 200 metres. So I am absolutely ok with the amount. But the way of handling and considering the overall situation is silly.

Remember: you have to pass the border by midnight, or pay an additional toll tax for the 5-minute day! 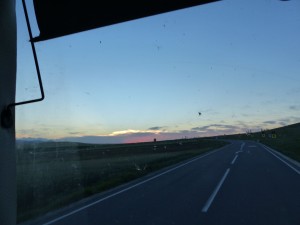 Coming to the border leaving the EU is other than crossing borders within. Was checked thoroughly when leaving Romania and a nice talk with the two border chaps. They even put up the effort to talk German to me! Nice!

Reaching the Moldavian side bureaucracy kicked in. And they hardly spoke any foreign language. Though what they could the applied with me. First I almost crushed the roof (beware the height of hardly 3m!) at the passport control as I didn’t watch out the little height of the construction I was supposed to pass underneath. Luckily a weary police officer noticed. I was sent on other street to register for toll, queued up at another place, got my vignette, back to booth 2, stamps all over, money exchanged and off for customs control.

A big compliment to the Moldavian officers: they were the first ever to check my garage! YES! Until now I could have carried an entire family from anywhere in the world across all borders I crossed. Nobody ever had the idea yet to check the garage, though the rubbish-bin inside Hubert was always thoroughly checked!

Immigration took 90 minutes. Complicated but a procedure to go through and easy to handle. Most of the time you just wait for your turn. And the people were really friendly! You simply do step by step.

The road up to Chisinau is also in a good state, but now Hubert’s left front wheel had an issue. MAN has no official representation in Moldova. I AM IN THE STYX! So for now I’ve also been there, done that. Was supposed to find a solution in Tiraspol. I thought Ijust check the wittiness of the Moldovan technicians and will then compare with my Kenyan experience.

The sun was shining, me in a good mood and nothing will stop Hubert and me! It is big fun and the few itches from third parties may seem a nuisance, but in the end they turn an anecdote in my notes. People just try to survive – who will criticise them for that!?